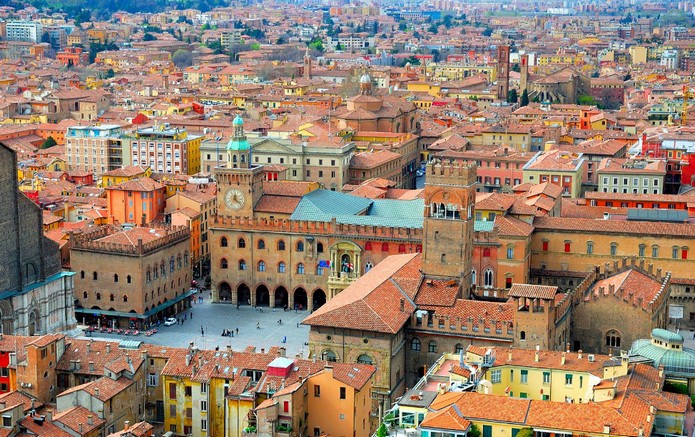 Bologna is the lively, historic capital of the Emilia-Romagna region, in northern Italy.

Its Piazza Maggiore is a sprawling plaza lined with arched colonnades, cafes and medieval and structure. 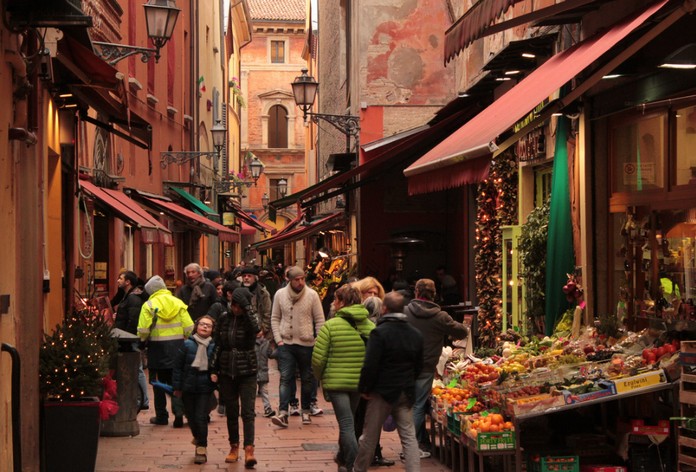 It is the 7th most populous city in Italy, located in the heart of a metropolitan area (officially recognized by the Italian government as a citta metropolitana) of about one million. Italy is considered to be one of the most romantic travel destinations all across the globe. Its most exciting city is Bologna, though! Let us see together the reasons why!
PrevNext

Bologna is well-known for the terracotta hues of its buildings. The city used to have historic communist leanings and that is why it is linked with the red color.

Apart from its political background, the city is a foodie hub. Its famous specialty is the pasta alla Bolognese, which was invented here!

Pisa is not the only city that has a leaning tower. Bologna has two towers, which have become a symbol of the city.

The tower named “Garisenda” leans more dramatically than Pisa’s tower fact that adds Bologna to your travel list with places in Italy instantly!

Porticoes are these pretty arches that line Bologna’s streets. Their characteristic feature is their architectural structure in harmony with the main body of the buildings.

They are extremely useful as they can be used as a handy shield from rain or blinding sun. In the past these beautiful porticoes were also the places, where merchants would set up stalls to sell their wares!

The most stunning Christian temple is called Chiesa della Santa, where there are the mummified remains of Saint Catherine of Bologna in an eerie side chapel.

Apart from this religious masterpiece there are also seven churches of Santo Stefano. These were built over a six hundred-year period in different styles. That is the reason why they are so unique!!

Venice is not the only city that has canals. In Bologna canals were also built in order to give a boost to the upcoming textiles industry, which was simply thriving those days.

Nowadays, most of the city’s canals lie under the car parks and the tourists have sadly no opportunity to see their entire glory!

This particular Italian city is considered to be a small city with plenty thing and activities to do. This feature makes it the perfect place to be for a short trip.

You can hike into the surrounding hills, or train journeys to the rest of Italy; Modena, Ferrara, Venice, Florence and Parma!

For example, lots of the churches have characteristics of the Renaissance, while other have elements from the Baroque period!

8. It’s got the best university ever

Maybe that is an exaggeration, but its university is simply stunning. Students from all over the world can confirm that, as Bologna has been for years in the list of the most popular Erasmus destinations.

The university, which could be on the top of all, could be considered the Carpigiani Gelato University, though! It is also known as the Gelato Museum and has everything about the history of gelato!

9. It’s not too touristy

The crowded places are not always among the most beloved travel destinations. Ok, we appreciate the human company but not in the summer.

Visit Bologna and have the opportunity to see a city in its glory under the summer sun without all the noise that tourists groups usually make!

23 Amazing Places to Visit on Your Italian Road Trip