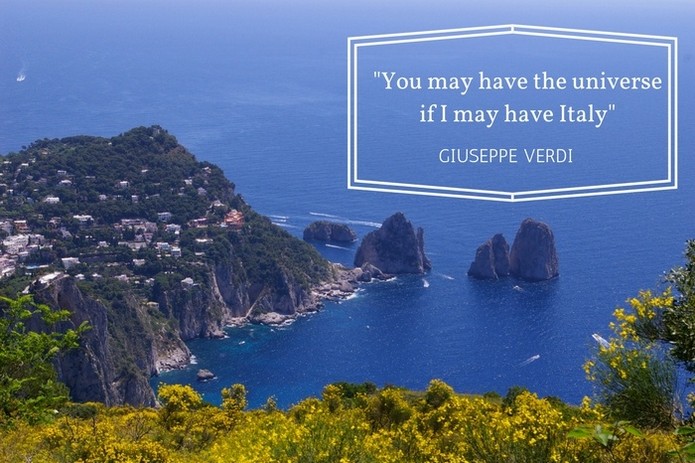 In Europe, Italy is considered as a metropolitan travel destination that combines both cultural monuments and rustic landscapes.Find out more about this beautiful country by reading the five quotes about the country’s glory, which we have selected for you!

Because of its importance in the heart of the tourists, many memorable figures from mainly from the fields of culture and art have expressed their admiration.

As a traveler there, you should be aware of a few quotes that have been said about the Bel Paese, the “beautiful country” of Italy.
PrevNext

“You may have the universe if I may have Italy.”
From the quote of Giuseppe Verdi, we can understand that Italy was very important to him. In fact, he would rather exchange everything for having only “Bel Paese”!

“Watching Italians eat (especially men, I have to say) is a form of tourism the books don’t tell you about. They close their eyes, raise their eyebrows into accent marks, and make sounds of acute appreciation. It’s fairly sexy. Of course I don’t know how these men behave at home, if they help with the cooking or are vain and boorish and mistreat their wives. I realized Mediterranean cultures have their issues. Fine, don’t burst my bubble. I didn’t want to marry these guys, I just wanted to watch.”


Barbara Kingsolve mentions that the Italian cuisine and the satisfaction of the Italian people, mainly men, while they are eating. She is very descriptive and expresses her wonder about that fact.

“Italy, and the spring and first love all together should suffice to make the gloomiest person happy.”
All the Mediterraen countries are a lovely choice especially in spring. Russell wants to emphasize that fact by adding that Italy is the place to be happy even for those who are always miserable!

“Methinks I will not die quite happy without having seen something of that Rome!”
Sir Walter Scott is so determined to visit the Italian capital be expressing his unhappiness of not doing it, so. Maybe, he knows something; book your ticket now!

“What is the fatal charm of Italy? What do we find there that can be found nowhere else? I believe it is a certain permission to be human, which other places, other countries, lost long ago.”
Erica Jong mentions that Italy is the perfect place to live like a human. Many countries of the world have lost this effect, as their lifestyles are more rapid. If you try to relax, come in Italy.

Weather warning: Strong rainfalls, Thunderstorms & Stormy winds up to 9B...

This amazing $97 Train Route Shows the Stunning Beauty of Americas...